After our last piece on those Peugeot concepts there has been another one making its way onto our radar. The latest one gets the name of the Fractal, and it is a further evidence of a new aggressive direction for Peugeot in the near future most likely with the 3008 crossover which is due next year. They looked like they have  been dreamed up by a teenager who has spent the whole day playing Need for Speed and watching the Fast and Furious series, and honestly, I love it. This Fractal is a black and white model which again takes on  the electric theme and is being described as an electric urban coupe, and it is hard to grasp that the same company made the stunning Fractal are the same company that made the eyesore that is the Peugeot 1007.

I wont comment too much on the look of the Fractal however, as there pictures are much better at doing that. What makes the Fractal interesting is its focus on sound tech, with Peugeot attempting to cut down road noise whilst simultaneously improving the cars cabin audio. This isn’t just a case of sticking a Bose logo on your speaker, no, Peugeot have gone much deeper than that. Inside the cabin you will notice and abundance of weird looking protruding foamy materials, which I’m guessing are akin to what you would find in a music studio to help acoustics, which is exactly what it is for in the Fractal. Basically these materials will absorb any unwanted ricochets of sound, making the overall sound much more crisp. Furthermore they have used mathematical equations in order to shape the door sills in a way that will trap and limit the amount of noise that gets in to the cabin from the outside world.  The Fractal is expected to make an appearance at the Frankfurt motor show later this month, I wish I could be there to see it! But I’ll be in England, in the rain, wishing my second hand Audi A1 was an Aston Martin. 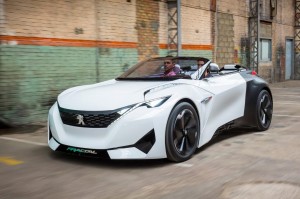